I left school at Christmas 1954 and started work at a company manufacturing suitcases called S Noton Ltd at Endurance Works on Forest Road – the original A-E-C works which many years later became the home of Merchandise Transport after Ferry Lane closed – we did in my time (1956-1957) find a number of old General engines in the cellar below the works. I left Noton’s and went to work for the Eastern National Bus Company at their garage in Wood Green on the 251 road to and from Southend, I started as a conductor and finished as driver. I wanted long distance driving and one of my neighbours was a Lebus driver – Terry Cornell who was on Merchandise, mainly Scotch, we were both members of the Walthamstow Trades Hall up in Hoe Street by the Bell Corner in Walthamstow, we talked about getting me a job at Lebus as a driver in 1961.

I went down for an interview upstairs in the office with Percy Mounteer who was the transport manager at that time and I was given a start, I thought that I would be out on the road straight away but along with several new drivers like myself we were kept on the loading bays for roughly two months to learn the art of loading furniture and handling furniture without doing any damage. The loader that taught me the game was a guy by the name of George Emms who was a good fast loader.

The yard foreman in charge of all the drivers was Bill Death (correct spelling!) and Charlie Chazalon (known by us as CHAS) as his shunter and gofer. The two bays (1 and 2) from the gate were the Irish bays with their Bedford units, two S TYPES, one TK and six trailers with Scammel couplings (three in Merchandise grey a three in Curran Transport of Northern Ireland in blue), a Merchandise driver would run them up to Preston Docks swap trailers which would be loaded onto a ferry for shipment and Curran would collect them in Larne to deliver all over Ireland, that job ran seven days a week. The last two bays were for Merchandise which was all goods to be carried on A licence and Johnny Noble was in charge, he would put part loads onto a part load of Lebus furniture, the loads could be anything from more furniture to paper for Gestener to tyres.

Johnny used to check each load to try to get some of his Merchandise onto each A licence truck, they never ran with half a load hence the tailboard loads. As far as I can remember the A licences were bought from Charlie Dormer who ran a lot of eight legger tankers painted green and some furniture vans out of Balls Pond Road by Dalston Junction and at one time Lebus did try to get the whole fleet of trucks on C licence transferred to the A licence but there were so many objections that they lost the application in the licencing court and it was refused. Lebus had a bedding factory by the name of Eventide who were down in the city somewhere near Goswell Road and in my later DH Transport days I did do quite a few loads out of there. Eventide also had a small fleet of TK Bedfords on C licence.

Lebus also had the soft furnishing factory out in Woodley near Reading, a sawmill and forest close by, they also ran C licence fleet and we all used to meet up in various parts of the country. The fleet on Merchandise consisted of TK Bedfords on A licence numbers CXD 901 to CXD 912 mainly on Scotch and more that I cannot remember, the big Bedford Coronets a coach built cab numbers XXF 701 to XXF 712 mainly on Lancashire work, XXF 707 was in the film of the Great Train Robbery where Ronnie Biggs escapes over the wall from prison through the trucks roof into the body. Albion Victors just two that I can remember XYO 17 and XYO 18 on mainly Scotch. There were many more of which I cannot remember. Lebus had a large fleet on C licences, small TKs, small Coronets, Bedfords, Albion Chieftans and some petrol O type Bedfords. Lebus also employed two furniture carriers from Derby who were Porter and Keeling, they did most of the Midlands work.

Some names of drivers that I remember – Kit King, Sid Smith from Aberdeen, Alfie Broomhead and Fred Forrest (general manager). When I did get onto the road I was given a petrol Bedford number 604 —- with a huge Luton and it was a monster which rolled if you took a corner to fast and my first trip was down to Sheerness on the Isle of Sheppey. Later I was given an S type Bedford diesel number 829 ALM and my first trip was two of us going down to the far west of Cornwall with all stations from Bodmin down to Penzance and running down on Sunday. After a reasonable time I eventually got onto Merchandise with CXD 908 and ran with the big boys up into Scotland and Manchester, we used to return load from Metal Containers in Ellesmere Port, Robbicans in Hull, Metal Bok all over, India Tyres in Inchinan, Murphy Richards in Dundee, Tricity Cookers in Spennymoor Durham, Merchandise Transport in Lancashire, London Road Glasgow and many more companies. Most of the new bodies were built by Bonalack and were good solid bodies that took a lot of hard work.

I eventually left Lebus and went over to DH Transport on Ferry Lane but I was still in and out of Lebus doing a lot of their A licence work such as a complete house removal down to St Agnes in Cornwall and to places that they did not want to send a truck like the Far North of Scotland, Devon, Cornwall and North Wales. Sam Harris was the transport manager and young Ted Wade was the guvnor, My first truck on DH was an Albion Chieftan 733 RMV, then an Albion Victor 702 WMX. Then a brand new TK Bedford number DMV 689A. I finished up with a Commer OLB 430E. By this time I was away from home for weeks at a time and my wife was starting to get a little bit fed up with my roving life so I gave it up.

More of Michael’s memories as a professional driver are available on the Red RF website. 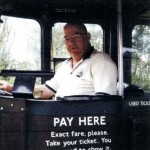 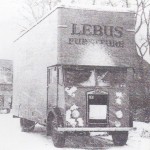 Albion Chieftain Brough A66 loaded for Dundee 1962, Jensen behind 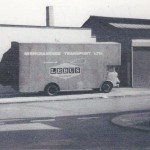 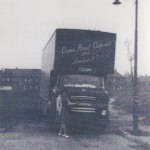 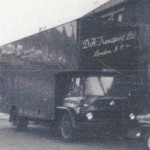 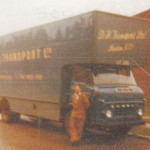 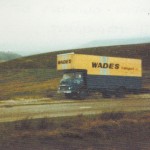 9 thoughts on “Driving for Lebus”