The original spelling was Ley but since 1570 all acts of parliament say Lee. As a result, most official names have been spelt Lee, e.g. Lee Conservancy Board (1868), Lee Valley Regional Park (1967), etc.

The first occurrence of Lea was probably on a map dated 1576, and most maps since have continued to call the river the Lea, but refer to the canalised sections as the Lee Navigation. North of Hertford, the river is therefore nearly always known as the Lea. South of Hertford, although the Lee Navigation and River Lea are often two separate channels running side by side, they often join up for a distance, and most maps now say ‘River Lea or Lee’ to cover both possibilities!

The correct spelling is open to debate and can be the cause of many heated discussions, none ever reaching a conclusion. Throughout this site you will find both spellings, but the latest Ordnance Survey map of the district (Explorer 174) is titled Epping Forest & Lee Valley. In general though, it is equally acceptable to refer to the Lea Valley district, just as it is to visit the Lee Valley Trading Estate, but it is wrong to write about the Lea Valley Park, that should be spelt Lee! 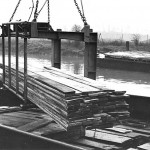