At the outbreak of the Second World War, Herman Lebus commissioned a series of underground air raid shelters at the Finsbury Works site at Tottenham Hale. The shelters were designed to house the factory’s 6,000 workers in the event of an air strike. The workers at that time would have been involved in the construction of Albemarle bombers, Airspeed Horsa gliders, replica Sherman tanks and the Mosquito – this was part of Lebus’s contribution to the war effort.

The shelters themselves were a complex network of twelve tunnels of pre-cast concrete sections; the tunnels were estimate to extend to a total of 2.5km and were formed in pairs with interconnecting passages, access areas and vent shafts.

Oliver Lebus, the grandson of Harris Lebus and son of Sir Herman Lebus (Sir Herman was knighted for his contribution to the war effort) worked for the Lebus factory after serving in the Army between 1939 and 1946, eventually taking the role of chairman. He recalled during a talk on the subject at Bruce Castle in 2008 (home of the local history archives):

“Because of the scale of the factory it would have taken people many minutes to reach the air shelters, so other shelters were later built above ground for each workshop. After that, local people were always welcome to take shelter in the underground tunnels.”

The underground shelters remained long forgotten for over 60 years until in 2008, prior to the construction of a modern residential block on the site, English Heritage, led by Kim Stabler, oversaw the recording of the unearthing of a treasure trove of wartime relics. These included: Second World War helmets, stretchers, glue bottles, pencil drawings and racy graffiti.

Below are some images of the demolition in 2008. These were kindly submitted by and are copyrighted to Malcolm Muir who was working on the site. 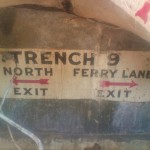 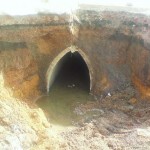 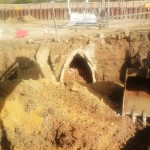 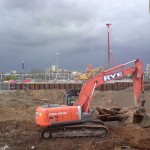 Click on the PDF icon for a document containing the air raid shelter layouts prior to demolition, this along with the images below were supplied by Lee Valley Estates. 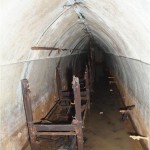 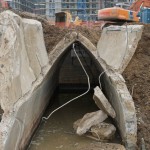 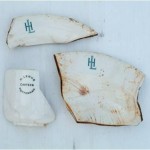 Crockery from the canteen 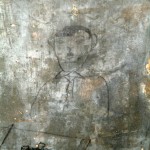