My Father Leonard Wilfred Hyland (Len) completed his Engineering and Draughtsmanship at London County Council Junior Commercial and Junior Technical Evening Institute in 1927, he was around 17 years old. He was attested to being intelligent and industrious with his drawing capabilities which were naturally improved by an artistic temperament. I am unsure whether he undertook further training after this.

Len’s father, Edward, appears on the census as a French Polisher, it was Edward, I am told, that assisted my father in gaining employment at the Harris Lebus furniture factory where he too worked for many years. Len remained at Harris Lebus until 1950 when we immigrated to Australia.

During WW2, Len was excused from military duties due to his important work on the ubiquitous Mosquito. He was active in the Home Guard and there is a photo of him proudly standing to attention in his uniform. He married in 1938 and my parents lived in Woodford Green. 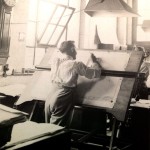 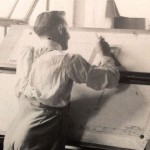 Harris Lebus marking visible on the bottom left of the worksheet, 1930s

One thought on “Len Hyland”