My paternal grandparents left Ukraine in1905 to escape the pogroms. Grandpa came first to establish himself, but grandma was quickly sent to London by her father, who said “Your husband will find another woman”. She travelled overland with three very young children, a long and difficult journey. My father Harry Tallman was six weeks old when he arrived here and his brother and sister just infants.

Dad was a clever, studious boy, always reading, and won a scholarship to a grammar school. However, since this was during the First World War, and Russia had come into the war on “the wrong side” Dad was not allowed his scholarship and at 14 he went to work with his father and became a cabinet maker. At age 17 he won a prize (£5 and a set of tools) as the best young cabinet maker in Bethnal Green, quite an achievement in an area which was the centre of the furniture trade. Working for your dad is not the best kind of apprenticeship; you don’t always get paid and the hours are not specified. When my parents married my mother made my father leave his father’s employment.

Many of the people we knew worked in the garment and furniture trades. The slump of the 1930s hit them badly. My father often had to take unskilled, temporary jobs and my mother trimmed hats at home for a pittance. Then came the war and my father was not called up but was told he was in a “reserved occupation” and waited to be allotted a job. Eventually he was sent to work at the Harris Lebus furniture factory in Tottenham, which was switching to war work. What follows are my childhood memories of that time.

Dad told us he was part of a team which was developing the Mosquito aircraft; cabinet makers were allotted this very precise work because of their special skills. He had security documents and worked in an isolated, secure section of the factory together with the designers of plane. They 5 would make one section, then another specialised worker would lay on a skin using newly developed adhesives. If a tiny bubble appeared the whole item would be smashed up and the operation repeated. During the examination and testing there were long periods of tedium when Dad would maybe stroll along the Lea until required again.

He told us how astonished he was, when new on the site, he saw four men walking by, carrying an aeroplane on their shoulders. It was, of course, a Horsa glider made mainly of balsa wood. He sometimes brought home offcuts of balsa wood to amuse me with since I enjoyed squashing them up in one hand. One day he made a balsa rattle for my baby sister, and filled it with screws and nails. My mother soon confiscated that. Sometimes dad would bring home used filing cards in different colours for me to play with. They were called Job Cards and Jig Cards and had people’s names and work details on them. No security worries there!

Although we were living among the bombs and horrors of war, my father was working in the best conditions he ever had or ever would have. Lebus’s had canteens, a medical centre and other welfare features so the staff were well looked after. However, when the war ended my father and others like him were again made redundant and went back to the small, primitive workshops in Bethnal Green where they had started.

It does seem curious to me now that after the war Lebus could staff the factory fully again without skilled tradesmen like my father. Did all their previous staff return, fit and well, and did they all want to be factory operatives once more? The army gave many men opportunities they would never have had in peacetime to improve their lives. I had two friends from extremely poor families; after military service one got a music degree and became a composer and the other an architect. However, it didn’t happen for dad. But, although he never boasted about it, I know he was immensely proud of having contributed to the production of “the aeroplane that won the war”. 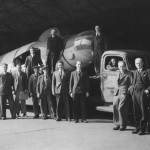