After my parents divorced when I was nearly four years old, I went to live in Tottenham with my father, his sister Marion, my grandmother and later my young brother.

Aunt Marion was a state registered nurse who worked in the Harris Lebus surgery for many years; in the 50’s and 60’s. I did go there a couple of times. I’m pretty sure that the surgery had a small X-Ray machine and was certainly well equipped to do first aid and minor ops. There were two other nurses with Marion who I knew as ‘Sister’ and Elsie. They lived together and bred dachshunds which I showed on a few occasions at dog shows on their behalf. I went to their house once.

For two weeks in the summer of 1961 (or 62), because both post ladies were away at the same time, my aunt volunteered me for the temporary job of delivering the internal mail around the vast factory. I was training as a dancer and very fit, so it was a great opportunity to stay in shape in the summer holiday. I loved it.

I enjoyed learning the route through miles it seemed, of long corridors, and walking quickly to deliver envelopes and small packets to the different shops. I would get wolf whistles from the guys in the machine and polishing shops! My goodness, writing this I can smell the polish…

I only went once to the sawmills beside the River Lea as it was deemed too dangerous. Yes, the great circular saws were used to slice through the large tree trunks transported by the river to the factory’s dock. Trees came in one end of the factory and out the other as quality furniture! Some days I would collect or deliver letters to the offices. There the walls were covered in wood panels, very smart I thought.

Near the end of the time I learnt that I was only required to go around the factory once. Half in the morning, half in the afternoon. I had been doing the route twice a day – being a young teen that was no problem for me and I continued to do it for the last few days.

One of the workers at the factory was Mr. Protheroe. He had a caravan at Clacton which he would rent out to his colleagues. My aunt would save a little money with him each week, to rent it for two weeks in the summer. My grandmother, aunt and me would spend days on the beach. Or for sixpence a ride I would go round and round a nearby field on an old horse. My father would join us for the weekend. If it rained I remember them playing the card game canasta. Fond memories.

The first two photographs were taken at Clacton Pier and Mr. Protheroe’s caravan in the 1950s.
The next three photographs were taken at the Harris Lebus 1952/3 Christmas parties, my brother and I are pictured left in the first one, my aunt Marion Clark is the nurse in the second one and that’s me on the far right in the third one.
The final photograph is taken at a dog show exhibiting Dachshunds for ‘Sister’ and Elsie, that’s me on the right aged nine I think. 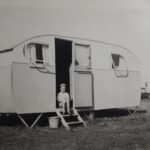 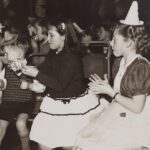 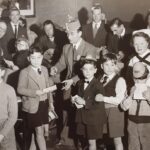 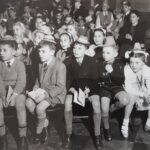 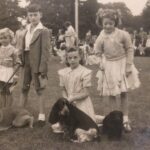