Sales Force in the Sixties

I found the article by Terry England very interesting as many of the people mentioned in it were either colleagues or superiors of mine.

When I left the army in 1959 having come back from East Africa, I applied to Harris Lebus for a job as a sales trainee. I remember going to the Tottenham factory by train and being somewhat impressed with the size of the place! I was interviewed by Ronnie Boss the Cabinet Sales Manager and was given a quick show around the Customers’ Service Department which was full of beautiful young ladies. Fortunately I got the job and was asked to report to the factory at Tottenham where I spent some days being shown the workings of the factory before being asked to report to the Maddox Street showrooms. This I did and travelled up by Green Line bus from Cheshunt for a year or so before being asked to report to the Liverpool Showrooms.

At Maddox Street I met several other ‘trainees’; John Overton, and Balfour Brown being two out of the four or ﬁve there who eventually went out on the road; Balfour doing the Westend and having a spectacular car accident within a few days of getting his new Ford Anglia! He apparently was gazing at the ladies along Camden Town and failed to spot a large hole in the middle of the road with a sign in front of it! Too late, he went down the hole! Whilst there, the manager whose name I forget now was replaced by Sam Perrett who had been with Times Furnishers and a friend of Reg Holloway the London Sales Manager. Reg was a large blustery fellow always in double breasted Prince of Wales check suit, and always smoking a cigarette! Everyone was ‘Dear Boy’ to Reg, ‘Yes, Dear Boy’, ‘No Dear Boy’. All rather funny when you think on it now.

One of the old boys there who used to fuss about writing out coded price tickets was Mr Flack who had been at the Tabernacle Street showrooms. Our main role there as sales assistants was to show intro retail clients around and to try and sell them furniture of course. If we succeeded, the details were sent on an order form to their respective retailer awaiting conﬁrmation to proceed or not. Sam Perrett used to walk about listening pretending to be straightening the furniture and would suggest sales techniques to us!

All in all I spent about a year there and introduced a friend of mine Eddy Stanhope to the company. He got the job and joined me at Maddox Street and later at Liverpool also. So, about late 1960 I was sent up to Liverpool. I was met at Lime Street Station by Gus Patterson and Paul Pocock. Paul’s dad was the Lebus rep for Devonshire and his brother Mike was a Lebus rep in Lancashire, where there were several Lebus reps. Lancashire was a very big county for Lebus business. The famous Lebus reps there were Eddy Burton (ex RAF), Mike Pocock, Jimmy James, Derek Marshall, and the great Peg O’Neill who took us all out for a meal and pints of bass every week at The Strand at Pier Head. I doubt if there is anyone alive now who remembers any of this.

Our Liverpool showrooms were in Hope Street a very famous street indeed. At one end there is the Catholic Cathedral and the other end the Anglican Cathedral! In the middle the Philharmonic Concert Hall and Philharmonic Pub, one of our favourite haunts as the draught Bass was superb! But really close was the Art College and ‘The Crack Pub’ our favourite drinking hole used by ‘The Quarry Men’. These lads eventually became known as ‘The Beatles’. You may have heard of them. I sold their ﬁrst manager (not Epstein), a load of ﬂuffy chairs for a night club he owned in Bold Street, the ‘Blue Angel’. Liverpool was an amazing place in those days and I had a marvellous time there living very near to the showrooms and later in Bootle.

I remember the day when I was told to go and buy a car as I was going to be promoted to rep status. I went to the local Austin/Morris showroom in Bold Street and bought two, one also for Eddy Stanhope who had heard also that he was off somewhere. They were Morris 1100’s in Connaught Green! Well cutting a very long story short and kissing goodbye to girlfriends etc, I set off for far off Peterborough. Lebus were very fair and allowed me to stay in the Angel Hotel for three months which gave me time to ﬁnd a ﬂat. The hotel no longer exists; it is now part of Marks and Spencer’s. I remember the lovely receptionist (Miss Peterborough actually)! And later I had many very successful stockrooms there. Stockrooms were held a couple of times a year to show new ranges of furniture and we invited all the local retail customers along and entertained them well!

I would have up to ten Lebus lorrries full of furniture for my large stockroom at The Angel. Dealers would come from miles around and we did big business. I always sold all the stock, nothing ever went back to Tottenham I am proud to say. I remember Mr. Maclean coming up once to see me but I was so busy with customers I could hardly spare him ﬁve minutes, which I am sure he understood! Peterborough was a completely different world to Liverpool and I adjusted to it and built up the turnover for the territory quite a lot, maybe as much as 40% in eighteen months. So, I was doing my bit. After a couple of year’s or so at Peterborough I was down at the Lebus preview at The Regal Edmonton Show, before the Earls Court Furniture Show, and heard some rumours on the grapevine. All very unsettling for me as I had built my territory up and was taken aback at what I heard from colleagues! To me Lebus was unassailable, the greatest and the best.

I knew that our New Link range was struggling against ‘G Plan’ by E. Gomme of High Wycombe. But nobody was selling as much as Gommes on their ﬁfty two week’s delivery! And we had competition from many other British furniture manufacturers, many doing good business like Stonehill, Beautility and Austinsuites. I heard that things were tight and that a certain Mr Jacob Zinkin, was thinking of cutting the sales force and cheapening quality to get prices down further. He was a friend of the Lebus family I believe; no doubt Mr Oliver or Mr Anthony Lebus! If anything we needed to improve quality which was slipping. I was getting too many returns on delivery damage, poor ﬁnishing and so forth that needed addressing. We did not need to cheapen things and compete with ﬁrms like Bluestone and Elvin at the bottom end of the market! But this was the way things were going, and Jack Thomas was always sending us more spiffs and job offers on versions of this and that, which I sold somewhat reluctantly.

So, being young and single and uncertain about the direction that Harris Lebus was heading and very much aware that nobody was really listening to the sales force anymore, I decided to look for another job. I was probably the very ﬁrst to panic and leave. I actually got a job with Meredew Furniture for the whole of East Anglia and North London a vast territory to cover actually, but therein lies another tale!

Terry England touches on the gradual demise. Somebody could have deﬁnitely sorted it out, but not with the family interference, and not the old guard who had seen the golden patch and good years and lacked the modern management skills.

Recently I visited a showroom with a lot of Harris Lebus furniture made in Hull and East London before the Tottenam factory was envisaged. Made by the old members of the family who came from Poland or somewhere like that and stopped off at Hull on the way to America. They never got to America and set up a cabinet making business in Hull, making ‘Art & Crafts’ type wonderful solid oak furniture that is quite valuable today. Most pieces I looked at, sideboards and cocktail cabinets were well over a thousand pounds each! I thought that they were superb, but I like that type of thing and I have a soft spot for the old ﬁrm! 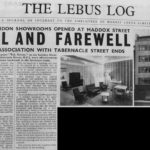 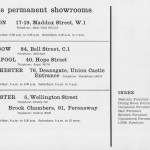 3 thoughts on “Sales Force in the Sixties”