My dad (Sam Wingrove) worked at Harris Lebus for about 22 years and was one of the first to leave when the factory closed in 1970, 5 months before I married in July of that year. He always said what a lovely firm it was to work for with the highest wages paid during that time. He worked in 52 shop (photo below, Christmas 1955). The Christmas parties were amazing so family oriented and they really did go all out to make it so special for the children. I can remember walking down the stone steps of the entrance to the factory and walking what seemed like miles until we finally reached the party, the factory was so huge with moving floors which carried furniture from section to section.

Harris Lebus played a special part in my parents lives because this is where they met. My mum was a machinist and helped to sew parachutes for the war effort, she was just 15 and dad 5 years older. My uncle Mick played for the football team (photo below, Harlow 1949) he is the one in the middle of the second row, behind him is Lenny Watson the goalie and kneeling on the right Checker, friends of my dad. Before the new sports club was built Harris Lebus had a wooden built sports pavilion just along a bit in Ferry Lane (photo below 1949) where they held their socials. That’s me dancing with my dad when I was 2, to the right in the background is my mum on the right dancing with an aunt and to the left of my dad another aunt dancing with a cousin, what wonderful nights we used to have at the Pando. When the new sports club and small factory were being built opposite the old factory my mum and aunt Cis Quinn ran the canteen feeding the workers.

Harris Lebus will always have a special place in my heart. 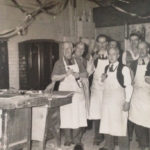 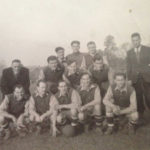 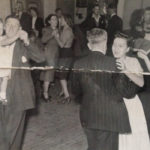