During the war, everyone had to do what was called ‘Essential Work’ if they were not in the forces, or were sick or too old or had young children to care for. This work was essential to the ‘war effort’.

Some people helped to make guns and ammunition and some worked on the land growing crops for our food which was rationed, because the ships that in peacetime carried goods and food from other countries were fighting the enemy and laying mines and keeping our coastline free from invasion.

Mrs Ivy Eden and myself worked at a factory called Harris Lebus which was an enormous place situated in Ferry Lane, Tottenham. It has since been pulled down and a huge housing estate now stands on the spot.

Before the war Harris Lebus was the largest manufacturer of furniture in the world. They too had to join in the ‘War Effort’ so they went into production of the fuselage of the Mosquito aircraft, also the Horsa glider which was used to carry troops on the great invasion of France on D Day, 6th June 1944.

Harris Lebus also made jettison tanks which were attached to aircraft to enable them to carry an extra load of fuel when flying into enemy territory. When the fuel was used up, the tanks were disposed of by being jettisoned out of the aircraft. They were made of balsa wood which is a very lightweight wood indeed.

My job was to keep track of the plans and drawings which the draughtsmen and the woodworkers had to use for their work. These drawings could have been very useful to the enemy if allowed to fall into their hands, so every drawing had to be accounted for after it had been used.

Ivy worked a circular saw and a drilling machine that was operated by foot. Everything had to be exactly right, e.g. the drill holes had to be the right size and in exactly the right place. If they were not, the people who inspected them sent them back to be done again.

Both the saw and the drill were powered by electricity, so for a young girl of only eighteen it was quite a skill to be able to concentrate without a serious accident. One day she did catch her finger under the drill. Probably she was tired, especially if there had been an air raid during the night.

Some people had to spray a kind of varnish which was called ‘dope’ onto some of the parts of the wood. These people had to drink a pint of milk a day which was supplied to them because of the danger to their lungs. This varnish smelt like nail varnish.

Men and women did the same sort of work and the men who had special skills were exempted from joining the forces. The salaries were very high and with bonuses, the ‘take home pay’ was a vast amount higher than that which was paid to the men and women in the forces – the Army, Navy and Air Force.

We had to work from 7 o’clock in the morning until 7 o’clock at night. We had one hour for lunch and we worked 7 days a week. We then had 11/2 days off and then again we would work another 7 days and so on. Every 14 weeks we had to do our quota of night work which was for I month. Then we would work from 7 o’clock in the evening until 7 o’clock in the morning with1 hour off to go up to the canteen for a meal. It was difficult to eat a dinner in the middle of the night, and especially so because next to Harris Lebus there was a slaughter house and in the night the smell of horse flesh cooking used to waft through into the canteen. It was a sickening smell and I shall never forget it.

Quite frequently there were air raids and we had notices all over the factory that would light up when the air-raid sirens sounded. We had men on the roof who were called ‘roof spotters’. When the sign ‘ALERT’ lit up it meant that the air-raid siren had sounded. We wouldn’t have heard it with all of the noises in the factory. We carried on working unless the sign ‘TAKE COVER’ was lit up. Every machine had to then be turned off and I had to lock up the drawings and we had to make our way to the brick-built shelters, which were all over the factory. We were in great danger because we were a target for the enemy because of the things, which were being made at Harris Lebus.

When the danger was over and the ‘all clear’ siren had sounded, the words ‘ALL CLEAR’ would light up. We then would return to work. Sometimes we were in the shelters for 1/2 hour, and sometimes for 2 or 3 hours, maybe more.

Every morning over the ‘tannoy’ system which was like an enormous speaker which sounded all over the factory we had ‘Music While You Work’, which was 1/2 hour of popular tunes of the War Years such as ‘We’ll Meet Again’, ‘Deep in the Heart of Texas’ and many more.

We all joined in the singing and we looked forward to it because it helped to break up the long hours of the day. ‘Music While You Work’ was also broadcast for 1/2 hour again in the afternoon. The BBC relayed it and people at home could also tune into it on their wirelesses. They were not known as radios in those days.

Also every morning and every afternoon the tea trolley would come round and sometimes if we were lucky the tea lady would have thick slices of bread and dripping in the mornings at 1d old money per slice. That was a real luxury in those days of rationing. In the afternoon we could buy a cake with our cup of tea or maybe a slice of bread pudding. We had 10 minutes break both morning and afternoon.

We didn’t like the work very much because most of it was uninteresting and we couldn’t leave unless we had a doctors certificate to state that we were not fit enough to continue. The only compensation was the very high wages, which we drew at the end of the week.

After work was finished for the day we were quite pretty well exhausted, but after we had ‘clocked off’, my friend and myself would go into the ‘Ladies’ wash room and change our clothes and get ready for a night out.

We would get on a bus outside the factory and the bus would take us to Manor House tube station. From Manor House we would go to Covent Garden on the tube train.

During the war Covent Garden Opera House was a dance hall so we used to dance all evening until 11 o’clock when the band played the last dance. We came back on the tube to Manor House and then got a bus home. By that time it was almost midnight, so as we had to get up again the next morning to get to work by 7 o’clock we had to get to bed pretty quickly.

As you can see, it was quite a long day for us but we had to have some leisure time after all of those long hours in a factory. We were, after all, quite young girls. 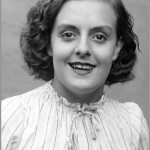