I decided to do a few paragraphs on the training that Lebus gave all drivers on their first day on the job.

This training lasted somewhere in the region of six weeks, it involved all aspects of driving, the care taken in the loading and the delivery of Lebus furniture. At the time that I started we would have anything in between one drop to a furniture shop like the Times and about thirty five drops, in that number there could be ten to fifteen private drops which would all be private homes, in quite remote countryside or in a town centre, it could be hard and time consuming to find. The transport office laid out the run order from number one to in this case number thirty five, by an ex driver and a lot of maps we did not have sat naves in those days.

In those days the guys on the Scottish and Northern England runs had a float of seven pounds and ten shillings and the rest on the South and Midlands etc a float of three pounds ten shillings, basically to pay for the transport digs, food, lorry parks and a runner if you needed one, the runner was a local guy who knew the area and they would wait at the entrance to the city such as the Tyne Bridge going into Newcastle upon Tyne, they would do a good job so you could knock out thirty drops in a day, at the end of each trip we went up to the transport office to hand in our paperwork, settle our expenses, hand in any receipts for that trip and have a general debrief.

On the first day you got your grey overalls with HL on the pocket on your chest, you were taken down to the loading bay and introduced to Chaz and Bill Death, they gave you instructions as to which bay and the loader. I remember George Emms as I had met him through Terry Cornell up the Walthamstow Trades Hall a working mans club.

I was taken to the bay by George, shown the notes, he would check off the load as the pieces came into the cage and instruct myself and the trucks driver as to just how to load it, we would put the article into a either a robe cover of the correct size 3/4 or even 5 feet a sideboard cover we used hessian for tables and chairs and any small pieces such as pot cupboards. The loader would tell us just where to place the article and in what position either on is side, upside down pot cupboards (bedside cabinets) would be wrapped and placed in a robe to save space. This how it would go until we had cleared the cage and hopefully the load had gone on which nothing left off. The Albion’s and the TKs which were on A licencee at about 2000 cubic feet and the Bedford’s on C licence were about 1600 cubic feet.

In the course of the six weeks or so, we the new drivers did go out once or twice a week with an older driver who had retired from journey work to local work to do some unloading and driving on some London runs, for that there was a couple of small wheel Bedford TKs and two or three Albion Claymore’s. Then we were given our first truck. I finished up with an A type petrol Bedford which had a huge luton and it rolled on bends quite frightening at first but you got used to the vehicles characteristics and I slowly progressed onto a diesel S type Bedford, eventually onto Merchandise with a TK. The training stood me well for the next fifty years or so, Bill Death was a hard taskmaster but he knew his job and it was a steep learning curve, a lot of good times with the Lebus drivers and others in the digs and the local pub whilst we ran up and down the country. 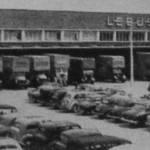