My father, William Sidney Gimson, joined Harris Lebus in 1929 when he was aged 18, as ‘post boy’ (his description). On leaving school at 14 he had lied about his age to obtain employment at Barretts the sweet manufacturers, where he worked as a clerk of some kind….a job which involved sitting at a high table and for which a specially tall chair had to be found as, although reaching 6 feet as an adult, he was then not tall enough to work on the desk. At 14 and a half he moved to sales, although I have no idea what that entailed at such a young age.

He needed to earn some money as soon as he could because his father was wounded in the Battle of the Somme (1916). After being shot in the back whilst tending a wounded soldier on the field of battle he was left a paraplegic and finally died of his wounds two days after Armistice Day, leaving my grandmother a widow with seven children to support.
His father was awarded the Military Medal for bravery and Dad kept the medal in its original box.

His father was enrolled as a soldier in The City of London Imperial Volunteers at a ceremony at the Guildhall in 1900, and as such was made a Freeman of the City of London. There was a farewell service at St. Pauls Cathedral and supper at the Inner Temple. Although I doubt this was for the ranks. They then marched to Nine Elms Railway Station for the train to Southampton. Apparently with cheering crowds all the way. They were off to fight in the Boer War.

The Freedom of the City would have entitled Dad to go to one of the City schools. But that would have been economically impossible, as he needed to earn some money to help support the family. In 1988 I found out that as the eldest son Dad was also eligible to become a Freeman of the City. Contrary to legend we learned that being a Freeman does not give you the right to take a flock of sheep across London Bridge!

(Following a long illness Dad died in Barts Hospital right next to the Guildhall, so I found myself registering his death in the City. He always declared himself to be a cockney, being born within the sound of Bow Bells).

For most of his life he cycled to work, as did most employees, down White Hart Lane from our home on the borders of Edmonton and Tottenham. and across to The Hale. He generally started work at 8.30am and in the early days he would return home for a cooked lunch in the middle of the day. He finished at 5.30pm and on Saturdays he worked a half day…on match days rushing home for something to eat and then walking to the Spurs ground.

He was a life-long Spurs’ fan, as were most of our friends and neighbours and Ted Ditchburn (Spurs and England goalkeeper) became a friend. When Dad was made redundant from Lebus’s he worked for Ted at his sports shop.

He enjoyed working as Company Chauffeur. The job took him to places all over this country as well as occasionally abroad. All our furniture came from Lebus of course and over time the original bedroom suite and dining table and chairs were swopped for a more modern style. I still use the two armchairs they owned (reupholdered many times). I think they may date from the 50s. (see picture).

Both my parents were fond of the ‘Miss Middletons’. They lived in Winchmore Hill and were always referred to this way and I believe they were both secretaries to the Directors, although I don’t remember which ones.

Dad was Secretary and Captain of the Lebus tennis club at some point and, being a keen gardener, used to win prizes for his begonias, in what must have been a company event. They were grown in hand-thrown clay flower pots – ‘seconds’ bought from the pottery kiln in White Hart Lane which was next to, or replaced by The Wonderloaf Bread factory.

He received a modest Company pension when he reached 65, although this did not extend to my mother when Dad died. I never heard him complain about his wages, or conditions of work. By today’s standards, my parents lived a simple life in a three-bedroomed terraced house they bought for £250 in 1935. Dad did a job he enjoyed for 40 years. Many today would envy him. 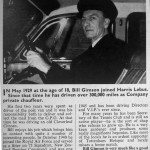 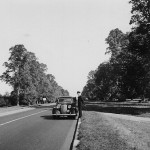 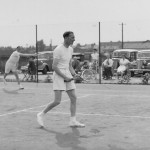 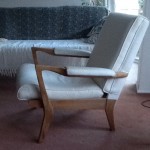 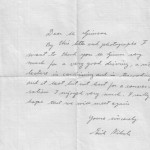 3 thoughts on “The Chauffeur”